Getting Ahead of Concussions – Marylands Health Matters, Towson Sports Medicine 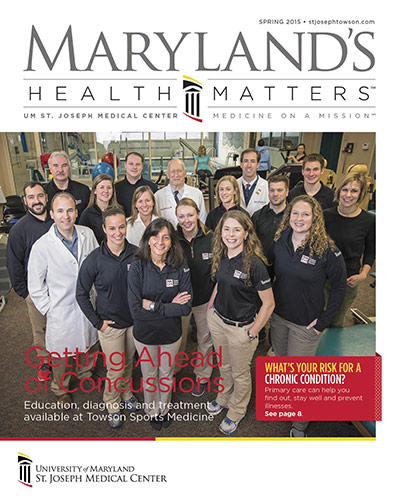 Protecting the brain through awareness, diagnosis and treatment at Towson Sports Medicine

May, 2015, Towson, Maryland–Awareness about the dangers of concussion is at an all-time high, in part because of the highly publicized concussion lawsuit brought by professional football players against the National Football League. On a local level, to protect young student-athletes, Towson Sports Medicine (TSM) is leading the way in the prevention, recognition and treatment of concussions through outreach and access to care for schools, athletic programs, athletic trainers, coaches, parents–and, of course, players.

Concussions are serious injuries, even if they seem mild. A concussion is a type of traumatic brain injury (TBI) caused by a blow to the head or by a violent, sudden movement of the head. About 3.8 million sports-related concussions occur annually in the United States. Sports are the second leading cause of TBI in youths ages 15 to 24 (car crashes are first). Traumatic brain injury can lead to lifelong problems with learning, memory, behavior and emotions.

So what is TSM doing about concussions, and how can it help your sports-oriented child or teenager? TSM not only specializes in diagnosing and treating concussions but also offers preconcussive testing to assess neurocognitive function (areas of the brain responsible for memory, perception and reasoning)… READ MORE! (PDF)

Towson Sports Medicine continues to address physical rehabilitation
of those in need.

We do this by restricting the number of patients in our clinics and strictly abiding by all CDC recommendations.

We are also able to offer remote services by means of phone calls and/or video conferencing.  The offering of these services is dependent on your insurance.

Do not hesitate to call if you have any questions or would like to have your therapy needs addressed by one of our therapists at any of our locations.

We respect your privacy. Your information is safe and will never be shared.